This policy details the test procedures to be used when performing an eccentricity test, using working standards of mass, using unknown loads and performing a rolling load test.

Trading Standards provides the following instructions on how to complete the eccentricity test on a weighing instrument.

Determining test loads for all capacities of weighing instruments

Test loads for performing an eccentricity test are calculated using the formula in Regulation 60. Depending on the capacity of the instrument and the number of support points the formulae can generate a value for the load that may not be achievable.

Trading Standards permits any calculated test load to be rounded down by the minimum capacity of the instrument under test.

An eccentricity test is performed on a weighing instrument during both verification and inspection tests.

When performing an eccentricity test there is no requirement to place the test load in the centre of the load receptor. The test is conducted using the procedure outlined in Regulation 60 of the Weights and Measures Regulations 1999.

The test load is calculated by using the formula: L = 1/3rd maximum capacity 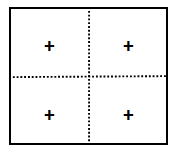 The load is calculated by using the formula: L = max / n-1, where n = the number of support points.

A rolling load test must be performed on a verification or inspection test on a weighing instrument that is used to weigh rolling loads.
A load equivalent to between:

must be applied at the six different positions on the centre line of the load receptor in both directions as indicated in Diagram 1.